It’s only in true darkness that you can see the light, and that’s what draws people from all over the world to Kejimkujik National Park and National Historic Site.

Dave Chapman, a life member of the Royal Astronomical Society of Canada, says Keji’s inky skies are blessedly free of light pollution — making them the perfect spot to appreciate the constellations.

“There’s almost nowhere you can go in North America — especially in the northeast — where you can actually see a dark sky because people are using too much light,” says Chapman.

“It’s going up into the sky where it’s of absolutely no use to anybody, it’s wasting energy, and it’s not good for nocturnal habitats.”

The Royal Astronomical Society of Canada designated Kejimkujik National Park and National Historic Site a Dark Sky Preserve in 2010 to celebrate its value and protect it from light pollution. In order to celebrate Keji’s status and encourage more people to stargaze, Shelburne’s Boxing Rock Brewing Co. has released a black IPA called “Dark as Keji.”

The beer is now available in NSLC and private wine stores around the province, as well as at Boxing Rock’s store at the brewery in Shelburne. Fifty cents from every six-pack sold will be donated to the Friends of Keji Cooperating Association to enhance dark sky public education programs, acquire additional astronomy equipment and dark sky kits for the public, and support continued efforts to control light pollution within Kejimkujik.

More than 600 people turned up for the beer’s official launch at Kejimkujik National Park and National Historic Site in late May, and the black IPA was so popular that Boxing Rock ended up running out of samples. Boxing Rock co-owner Emily Tipton describes the brew as being dark like the night sky with a roasty body, hoppy finish and a taste that’s “bright like the stars.”

Norm Green, chairperson of the Friends of Keji Cooperating Association, says Keji’s custom-built Sky Circle is an ideal place to view the stars — with the naked eye or through one of their powerful telescopes — but there are plenty of other great spots in the park.

“We often tour around the lakeshores and you can see the stars by looking at their reflection in the lake,” says Green. “It’s quite stunningly beautiful.”

Visitors can check out the Sky Circle all season long, come for their twice-a-week interpreted programming, or visit during one of Kejimkujik’s two Dark Sky weekends this summer (August 11-13 and Sept. 22-24) for extra activities. Admission is free this year with the Parks Canada 2017 Discovery Pass.

“Kejimkujik’s dark skies offer some of the best night sky viewing in eastern North America. In the last seven years, we have gone from 30 visitors to 200 visitors per program,” says Borcoman. “In 2016 alone, close to 2,000 visitors attended a Dark Sky program.”

Green says he’s spoken with many people who have never admired a truly starry sky because they’ve never been anywhere dark enough.

“The skies at Keji at very dark and there is no light pollution to speak of, so it’s easy to see features you could never seen in an urban setting,” says Green. “I took a couple stargazing last fall at the Sky Circle and I had trouble getting them away! They just kept looking at the sky in awe.”

Chapman says Nova Scotians are so lucky to have Kejimkujik’s Dark Sky Preserve — along with the adjacent UNESCO-supported Acadian Skies & Mi’kmaq Lands — because there are people living in big cities who will go their entire lives without really experiencing the stars.

“You haven’t lived unless you’ve experienced a fully-dark sky where you can see the Milky Way,” says Chapman. “People who experience it for the first time are just blown away. It’s a natural wonder of the universe and it’s right here.”

Want to learn more about the dark sky? 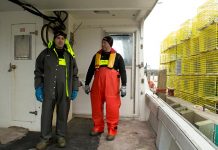