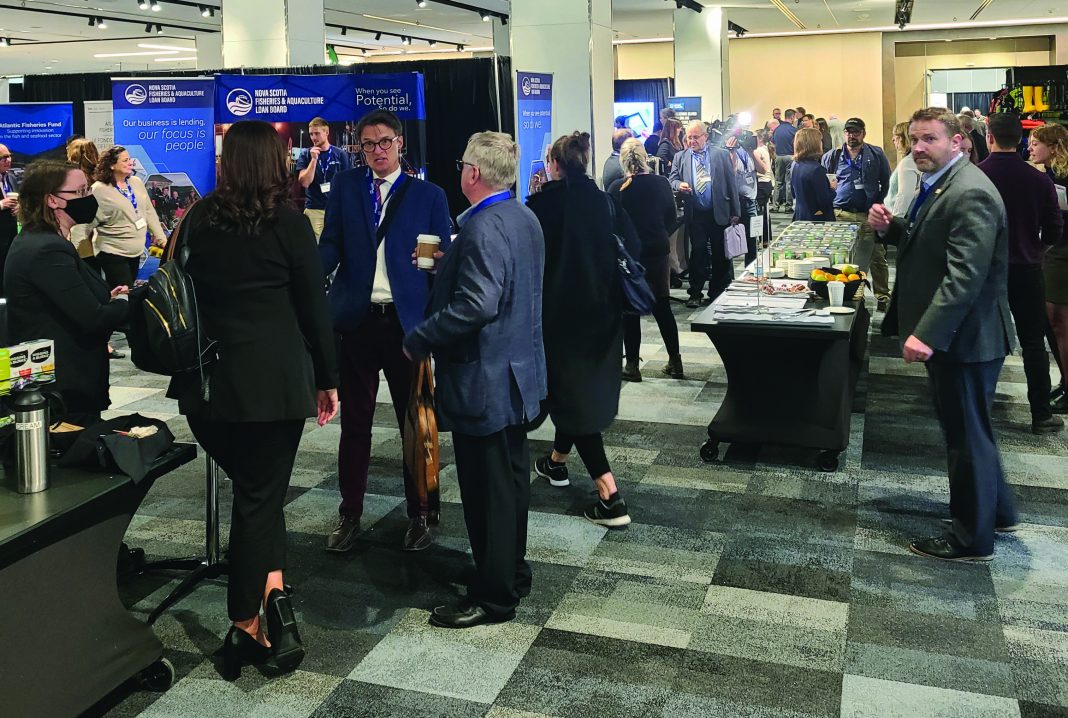 An estimated 570 people attended the 24th annual Nova Scotia Department of Fisheries and Aquaculture Minister’s Conference on Oct. 12 and 13 at the Halifax Convention Centre.

The conference, entitled Navigating the Future: Quality and Reliability through Innovation, was held in partnership with the Seafarmers Conference of the Aquaculture Association of Nova Scotia. More than 50 exhibitors took part in the conference in addition to the line-up of speakers.

“The conference went extremely well,” said department spokesperson Bruce Nunn. “Topics focused on what the industry is currently facing in terms of what is impacting their businesses and what opportunities there are for sustainable growth of their businesses,” adding the Minister mentioned “the upbeat mood of people at the conference who enjoyed meeting face-to-face and hearing from quality presenters.”

Workshops, panel discussions and networking events focused on innovation and quality filled the conference agenda including an overview of the global market, a global perspective on blue economy, break-out sessions focused on labour opportunities and challenges, research and development, certification programs, workplace safety and climate change.

“The highlight of the conference was recognizing exceptional individuals and organizations in Nova Scotia’s seafood, sportfish and aquaculture industries with Awards of Excellence for conservation, development and business achievements,” said Nunn.

“These awards recognize the exceptional individuals and organizations in Nova Scotia’s seafood, sportfish and aquaculture industries,” said Craig. “Their outstanding achievement comes from their hard work and dedication.”

A recently completed Nova Scotia seafood economic impact study, The Economic Contribution of the Seafood Industry to Nova Scotia, was also presented and discussed at the conference.

According to the study, the annual value of Nova Scotia’s seafood industry reached $2.8 billion in 2018, the largest by any metric in Canada. In 2018, Nova Scotia’s seafood industry contributed $1.6 billion to the provincial economy. This includes direct production, indirect impacts such as supply chain purchases, and induced impacts including employees spending their wages on other goods. The total impact on the Canadian economy was $2.1 billion.

In 2018, the industry provided 16,300 jobs in Nova Scotia and 20,300 in Canada, including direct, indirect and induced impacts. The total contribution to wages and salaries was $865 million in Nova Scotia and $1.1 billion for Canada.

The value of seafood exports reached $2.5 billion in 2021, up 21 per cent since 2018 and 160 per cent since 2007. Shellfish including lobster dominated exports, representing 84 per cent of total export value in 2021. Nova Scotia seafood is traded in every Canadian province and 62 countries. The United States and China are key markets comprising 76 per cent of export value.

“New and value-added products are creating new wealth. Innovation has been a key driver for industry growth,” reads the study. “Collaboration among industry, governments and institutions has driven this change. This innovation has created opportunities for the next generation… As the seafood industry embraces innovative solutions, new opportunities are created for youth in coastal communities. This will drive long-term sustainable development in these regions as the industry works together as partners united with a common purpose: to capitalize on emerging international markets and solidify its leadership in Nova Scotia’s economy.”