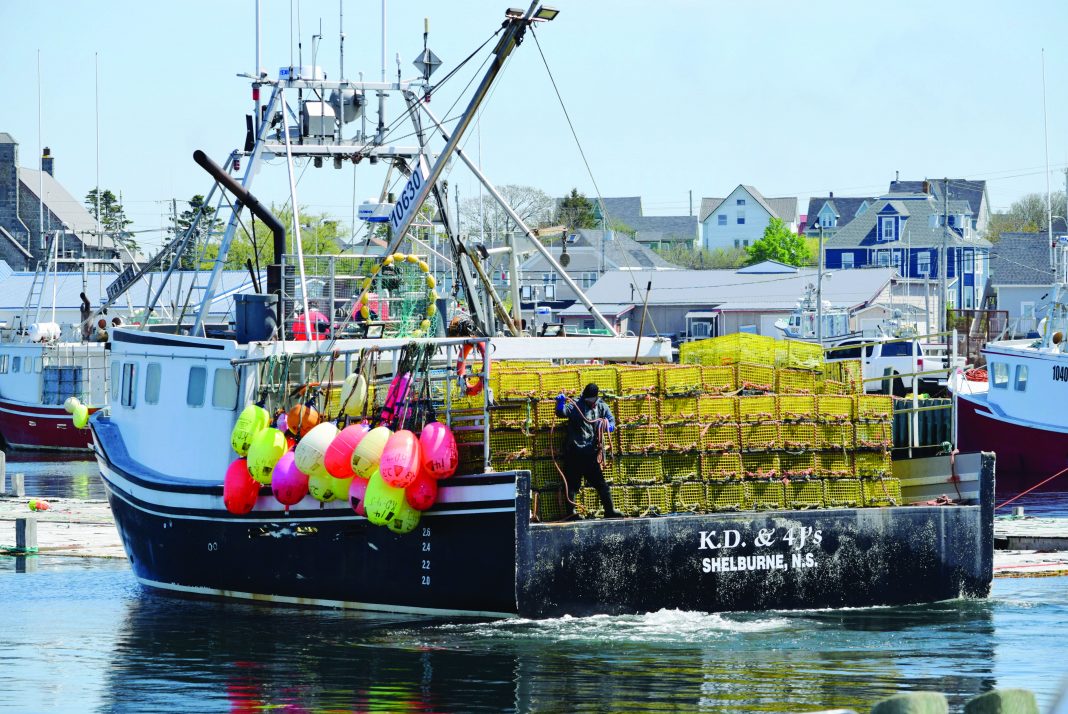 Thousands of harvesters will be aboard more than 1,700 fishing vessels when the lobster season opens in lobster fishing areas (LFA) 33 and 34 on Nov. 28.

Fisheries and Oceans Canada (DFO) is allowing for up to two days of flexibility in the opening date for the southwestern Nova Scotia fishery.

“This two-day flexibility will allow pre-season weather calls to discuss the possibility of opening early on Saturday Nov. 26, depending on the forecasted weather,” said Lindsey McDonald, DFO media relations. “The date for the first pre-season weather call has not yet been set, however they tend to begin the Wednesday or Thursday before the last Monday in November.”

MacDonald said as per established practice, representatives from each LFA Advisory Committee will participate in conference calls with staff from DFO, Canadian Coast Guard, as well as Environment and Climate Change Canada (ECCC) to discuss Dumping Day.

“These calls provide the fishing industry the opportunity to recommend a delay to the season based on safety concerns. On each call, the predicted weather and sea conditions are discussed. If the forecast calls for winds in excess of 26 knots, the opening is automatically delayed,” said MacDonald.

“However, if the forecast does not offer a definitive picture, then the final decision rests with the Department and representatives from each LFA. Each LFA makes its own decision, independently of the other, about opening. The pre-season weather calls have been in place for approximately 22 years. The safety of mariners and the protection of the marine environment are the top priorities for the Canadian Coast Guard.”

Ahead of opening day, the Canadian Coast Guard and its search and rescue partners — the Royal Canadian Air Force (RCAF), Department of National Defence (DND), DFO’s Conservation and Protection and the Coast Guard Auxiliary — will meet to coordinate their SAR postures, said MacDonald.

While the overall SAR plan is still in development as to the assets involved, the Coast Guard will pre-position a number of SAR vessels throughout the two fishing areas and additional crews will be brought in for opening day. The vessels will also provide detailed weather information to Halifax Marine Communications and Traffic Services (MCTS) when on station. RCAF will have crews and aircraft hold standby between 0600 AST and 1600 AST on opening day, said MacDonald.

There will be multiple Fisheries and Oceans Canada / Canadian Coast Guard (DFO/CCG) vessels and patrol aircraft in the area prior to the opening able to assist SAR whenever required, said MacDonald.

A number of Coast Guard Auxiliary members will also be active in LFAs 33 and 34. However, the majority of these vessels participate in the lobster fishery and have a limited response capability due to loaded lobster traps on their own vessels, said MacDonald.

“As always, DFO will continue to work with the Canadian Coast Guard, the Joint Rescue Coordination Centre, and other partner agencies to monitor fishing activity. We wish all harvesters a safe season,” said MacDonald.

Amirault said he expects the price of bait will be an issue.

“This year it sounds like there’s enough for the fall, but the cost is going to be high. I think we definitely will have a supply problem down the road with the quota cuts.”

“Our companies have become much more resourceful, however, in attracting the employees they need. Real time wages continue to increase and we have cast a wider net to find the individuals we need. For younger people, it is an excellent time to enter our sector: there is good compensation and much more upward mobility potential. Many companies are also increasing the automation in their facilities to assist their employees with their workloads and increase the facilities’ safety.”

As for markets, there was uncertainty on the horizon going into October.

“In 2022, we have experienced continued COVID-19 lockdown concerns in mainland China, the lack of normal air freight logistics to Europe and Asia and the ongoing concerns regarding high inflation around the world. All of these have been downward pressures upon both demand and pricing after a somewhat spectacular 2021. The market has signalled a much-reduced interest in both live and value-added frozen lobster at the current pricing, so we have adjustments to make to regain market share in the weeks and months ahead. On top of everything else, we have the continuing war in Ukraine which causes huge uncertainty worldwide, most particularly in Europe given the relative proximity of many of our European customers to the centre of conflict.”

Muise said compared to the last few years, the current situation is more troubling for certain. “One of our biggest concerns remains the lack of interest in Nova Scotia lobster from the processing sector. They have expensive inventory in their freezers which has not sold nearly as well as in previous years. Will they step up to the plate again for LFA 33/34 openings? It is far from certain what level of interest they may have, and it is far from certain what pricing they will be able to offer.”

During the summer months, Muise said product has been moving, but only 75 per cent of normal at best and at prices which do not reflect current inventory cost average. “So, it has been challenging and is likely to remain that way,” he said.

Geoff Irvine, executive director of the Lobster Council of Canada, said “after a significant adjustment in the late spring and early summer, the live market has been steady through the late summer and early fall with lockdowns in Chinese cities, a likely recession in Europe and ongoing food inflation in North America clouding the picture heading into the late fall. The processed sector has experienced a more dramatic adjustment with market prices for tails and meat falling about 30 per cent since the winter. Given the importance of the U.S. market for these products, there is no doubt that inflation and the ending of pandemic financial support has contributed to these market corrections.”

Compared to the past two years, Irvine said “consumers in our key markets had money to spend and few options on where to spend it, making the pandemic a boom for the lobster market with retail demand driving up prices for all lobster products in the second half of 2020, through 2021 and for the first half of 2022. There are many factors at play this fall and we hope that the market will settle down and return to a more typical level as restaurants continue to build their sales back to pre-pandemic levels, inflation begins to lower and consumers feel more confident to buy premium protein at retail.”

Irvine said the LCC will lead a trade mission to southeast Asia in February 2023 focused on Thailand, Vietnam and Singapore as well as being the proponent for a marketing campaign in China focused on all Atlantic Canadian seafood products.