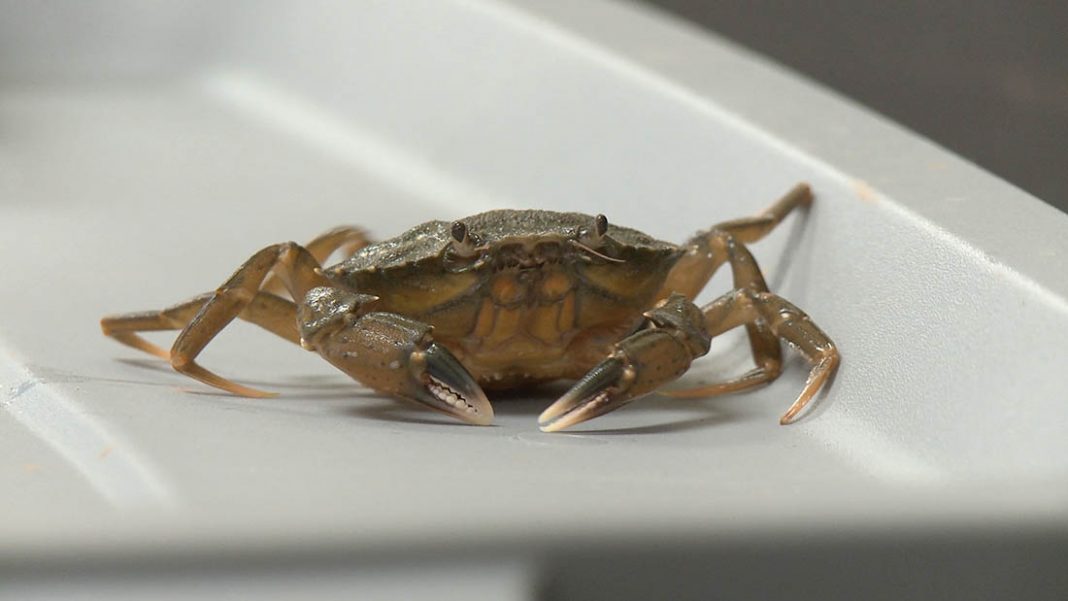 Research Ongoing for Use in Making Biodegradable Plastic From Shells

While the European green crab continues to top the invasive species most unwanted list, it could turn out to be useful on several fronts.

Research is underway into the development of biodegradable plastic from the shell waste of crustaceans, including the invasive European green crab.

Parks Canada has partnered with Dr. Audrey Moores, a McGill University chemistry professor, on the project. The partnership began after a paper published by Moores on using chitin, the material composing the shells of insects and crustaceans, to manufacture biodegradable plastic, caught the eye of Gabrielle Beaulieu, Coastal Restoration Project Manager at Kejimkujik National Park and Historic Site in Nova Scotia.

Kejimkujik’s battle with the green crab dates back to 2007 when conservation staff began noticing the disappearance of eelgrass. By 2010, eelgrass coverage in Kejimkujik’s Port Joli estuary had dropped to only two per cent of 1987 levels.

Kejimkujik staff and volunteers began trapping and removing green crabs using rowboats and canoes and so far, have removed two million of the crustaceans from estuary locations in the park. As a result, nearly 40 per cent of the original eelgrass beds have returned.

“The Department is continuing to evaluate options for expanding the commercial fishery, as well as other mechanisms to licence fishing for AIS (Aquatic Invasive Species) control purposes.”

Jeff Roy of Liverpool has been fishing green crab for four years now in Port Medway Harbour, selling his catch primarily for bait in the lobster fishery throughout Nova Scotia and New Brunswick.

“When I first started, I was selling them right to Grand Manan, N.B.,” he said, adding catches had been good until this past spring. “Last year I was catching eight to 10 crates a day,” he said. “This year two, maybe three crates every second day. Last year I caught 42,000 pounds in two months.”

Roy said the other half dozen or so green crab fishermen in the local area also found catches to be down this spring, much like local lobster landings.

“We had a cold spell in March and the water didn’t warm up,” he said, which is why lobster fishermen feel the catches were low and is the thought behind the decreased green crab landings.

“They’re kind of like a lobster. When the water gets cold, it seems like they go in the mud,” said Kevin Ross, president of the Brazil Rock 33/34 Fishermen’s Association, who bought himself a green crab licence last year to catch his own bait.

“It’s more or less a hobby for me,” he said, adding he hasn’t caught many yet, fishing for them in the Cape Sable Island area.

“I might try in the fall. They are a nuisance. They are very aggressive and can live for days out of the water. I hear they are a delicacy in some places in world.”

Roy said there is a “big demand” for green crab bait, adding once fishermen try it, especially in the spring in shoal water, it seems to work well. He has also had interest from local chefs. “They are really tasty.”

Multiple species of tunicates, smallmouth bass and chain pickerel are also part of the primary focus at this time for the Aquatic Invasive Species program in the region, said McNab.

DFO Science is monitoring the spread of various tunicates species and has conducted studies on impact and mitigation, said McNab, and is limiting the spread of these and other species by promoting responsible boating practices (i.e. “Clean, Drain, Dry” and “Don’t Let It Loose”) and also by mitigating risks related to introductions and transfers of live aquaculture stock.

“The aquaculture industry has been and is still collaborating with DFO and academic scientists in order to adapt to a new reality of doing business in the presence of tunicates (and other AIS), predominantly in the shellfish aquaculture industry. Marinas, boating organizations, fishing derbies, have been very receptive to collaboration and are also generally promoting responsible boating practices.”

DFO also delivers a Virtual AIS Monitoring Program where various citizen science and biodiversity databases are regularly and automatically monitored for the arrival of new species and the spread of current AIS.

DFO implemented the AIS Regulations in 2015 for preventing the spread and introduction of aquatic invasive species into Canadian waters and managing them once introduced.