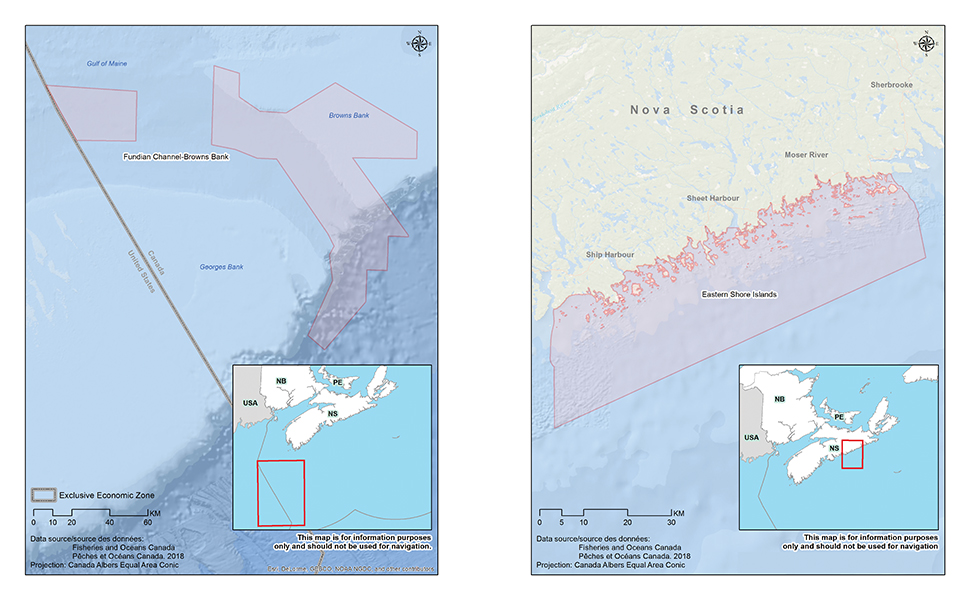 Federal Fisheries Minister Dominic LeBlanc made the announcement on March 22 in Halifax, along with news that the Eastern Canyons located east of Sable Island are being proposed for a new conservation area under the Fisheries Act.

The next steps in the MPA designation process include “extensive consultations with the provinces and First Nations, Indigenous organizations and stakeholders” to establish final boundaries and activity restrictions for the MPAs.

“One of the first steps in this collaborative process is to establish a multi-sector advisory committee to ensure the necessary input into the design of each site and development of the proposed regulations. Ecological and socioeconomic overviews and a risk assessment are also conducted. The information gathered at this stage will inform the development of conservation objectives, boundaries and zones and the specific management measures required for the MPA.”

The Eastern Shore Islands AOI is approximately 2,000 km2, and encompasses a dense archipelago of hundreds of islands stretching from Clam Bay near Jeddore Harbour to Barren Island near Liscomb Point. The site extends seaward roughly 25 km from the mainland, reaching depths of approximately 100 m. The area includes spawning habitat for Atlantic herring and juvenile areas for groundfish, coastal habitat for endangered Atlantic salmon and important nesting and foraging grounds for many colonial seabirds and shorebirds.

The channel is also the largest entrance to the Gulf of Maine from the open Atlantic Ocean and many species, including basking sharks, use it as a migration corridor. Several important fisheries are active in and around this area including Atlantic cod and cusk, tuna and offshore lobster.

The proposed Eastern Canyons conservation area is located approximately 60 km east of Sable Island off Banquereau and is approximately 36,000 km2.

“The dense corals found in the canyons and along the shelf edge warrant protection under DFO’s Policy for Managing the Impact of Fishing on Sensitive Benthic Areas. This site is extended into the deepwater to foster connectivity among the shelf, slope and abyssal plain, as deep-sea ecosystems are known to be vulnerable to disturbance,” reads the description of the area. Prohibited activities will “focus on bottom contact fishing activities that have the potential to impacts on the conservation features of that area. The consultation process for this proposed closure will be initiated following information gathering on the ecology and fisheries of this area.”

The proposed conservation and marine protected areas were selected from a larger MPA Network Design for the Maritimes Region, which will be released for public consultation in the coming months,” reads the release, and will contribute to the Government of Canada’s commitment to protect 10 per cent of Canadian waters by 2020.