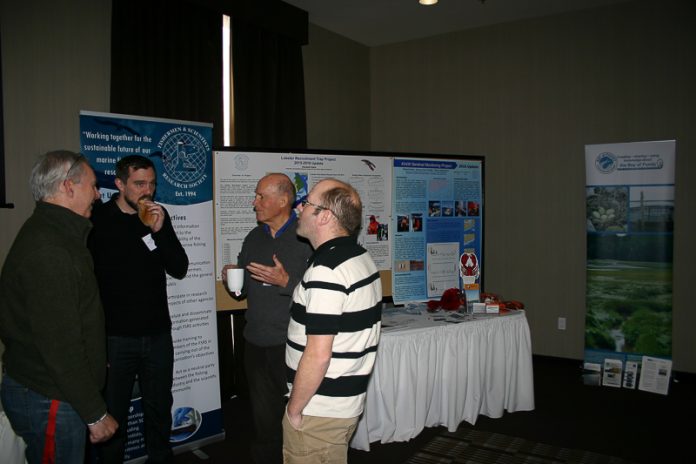 The 24th annual Fisherman and Scientists Research Society Conference kicked off with a keynote presentation by Dr. Megan Bailey, a member of the Ocean Frontier Institute working out of Dalhousie University. Focusing on the seafood supply chain, Bailey outlined her experience working with fishers in the Indonesian fishing industry to build sustainable practices and traceability. Bailey readily admits her experience with the Atlantic Canadian industry is limited, but she hopes some of the lessons learned overseas might have application here at home. Some of those lessons include:

• what should be a collaborative model between scientists and fishers has in many cases become a competitive relationship;

• obtaining funding for fisheries research isn’t the obstacle as much as finding ways to sustain that funding over a long enough period to make the research truly relevant and insightful;

• even if funding is arranged, there are always questions of who owns the data, who is it shared with and how do results move through government and the industry.

Bailey says as a food economist she is particularly interested in how certain trends in the seafood industry affect the originator of the product, namely the fishers. The current push to bring greater traceability to the fishing industry is a prime example. Although her research shows putting the fisher and the consumer closer together does result in the fisher getting paid a little more, it also has many side effects. The elimination of middlemen can see fishers having to take on responsibilities and costs formerly borne by those middlemen, such as marketing, storage and transportation.

“Power in a supply chain comes from downstream: retailers and consumers. Thus traceability becomes a form of controlling the fishing sector,” Bailey says.

To counter the power balance, Bailey says we need to revise our perceptions of seafood at a fundamental level.

“We don’t think of fish as food in the same way we think of other food as food. We see it more as a commodity,” Bailey says. “We need to see the fishing industry not as villains of the sea that rape and pillage, but as a sustainable food provider.”

Dr. Alain Barnett of the University of New Brunswick has been working closely with fishers in the Bay of Fundy area to develop a map showing areas of concentration of marine debris. However, the map isn’t itself the end goal.

Instead, what Barnett and the fishers he collaborates with would like to see as an end result is a cleaner ocean and easier ways for fishers to participate in the solution. Marine debris consists of old nets, fishing gear, traps, aquaculture equipment, weir stakes, lines, anchors, etc.; essentially anything that gets used on the water that goes missing or is lost or abandoned. The reason for the lost gear are numerous, including weather, accidental damage from other commercial vessels, intentional wrecking of a competitors gear, and so on. Whatever the reason, the debris becomes a hazard for fishers as it can entrap other gear, damage boats and even reduce fish stocks as the lost equipment continues to catch sea life that never makes it to market, sometimes referred to as “ghost fishing”.

“Fishers want more opportunities to clean up marine debris,” Barnett says. “They want the ability to be able to remove abandoned or old gear when they come across it.”

Complicating that desire on the part of fishers are concerns of regulatory bodies that allowing such activities could lead to off-season or expanded fisheries. Barnett says one of the goals of collaborative projects like the marine debris initiative is to find opportunities for the two sides to come together for the greater good of the industry.

The afternoon sessions involved three presentations, one each on: the impact of aquaculture operations on lobster stocks; the use of genetics in the fisheries; and mitigation of seabird mortality in the fisheries.

Dr. Melanie Wiber from the University of New Brunswick spoke about the impact of aquaculture operations on lobster stocks, although she emphasized from the beginning her work isn’t complete yet so she was unable to share final results.

However, what she did find was the use of collaborative information gathering, or joint production of knowledge (JPK), inevitably lead to certain inescapable outcomes:
• the incorporation of local knowledge does add value;
• JPK can mitigate environmental risks; but
• JPK is always “political’ and can result in the exclusion of potential sources of information (in this case, representatives of the aquaculture industry).

“Relying on the expertise, skill and equipment of fishermen made it impossible to invite aquaculture to the table as it would alienate the fishermen and cast doubt on the results,” Wiber says.

Although official results are not yet available, Wiber does say there are some concrete outcomes from the work already impacting the industry. Although it’s true some of the chemicals used in aquaculture can cause lobster mortality and premature molting, Wiber says the fishers involved in her study emerged assured the lobster stocks aren’t being adversely affected in every case and are much more likely to interact with the aquaculture industry in the future. The role of genetics was covered by Dr. Gregory Puncher, from the Department of Biological Sciences at the University of New Brunswick. He showed how the use of genetics is currently being used for everything from detecting food fraud to showing how fish species are adapting over time to such stresses as increased harvesting and climate change.

“Genetic identification has improved to the point where we can take a water sample from someone and determine what species are present in that water source and if invasive species are present, all without ever going fishing there or even seeing the fish,” Puncher says.

By using archived DNA samples and comparing them to current sample, Puncher says he can see how current cod species have changed over the years. For example, cod males mature much faster than they used to and put more of their biological effort into growing their gonads, sacrificing overall size to do so. Unfortunately, efforts to reduce the pressure on cod stocks will not undo these changes since they’re now evolutionary, not a temporary response.

Puncher also showed how genetics has revealed the old method of managing fish stocks, i.e. thinking of them as being tied to specific geography, is invalid. Genetics shows Bluefin tuna, for example, aren’t neatly broken down into eastern and western Atlantic groups. In fact, tuna stocks from Europe routinely travel across the Atlantic and can be found off the coast of Nova Scotia. This speaks to the need to treat all stocks as a single, worldwide unit and manage them accordingly.

Dr. John Paterson, formerly working with the Albatross Task Force, showed how the adoption of simple, low-tech mitigation devices in Namibia significantly reduced sea bird mortality. The use of tori lines and steel weights reduced bird deaths in the longline hake fishery by 85 to 90 per cent from estimate levels of 30,000 deaths per year. In the hake trawling fishery, tori lines achieved reductions of 99 per cent from estimated yearly deaths of 5,000 to 8,000.

The project also created a cottage industry for local populations as women’s groups were taught how to make tori lines for sale to the fishing industry.

The final formal presentation of the day focused on the use of electronic video monitoring (EVM) as an alternative to traditional monitoring programs.

Amanda Barney of Eco-Trust Canada outlined how the adoption of this technology has assisted fishers on Canada’s West coast combat trap tampering, while in New England it has automated and sped up the collection and delivery of observer data. This has allowed fishers to better cope with the shift by governments to download the cost of observer programs unto the fishery itself.

As the question and answer period for this presentation proved, the adoption of EVM in Atlantic Canada is a hotly contested topic. Many fishers are highly skeptical of the costs involved and don’t see it as a reliable, efficient tool.

Barney says she readily admits EVM can be expensive and may not be for everyone.

Chelsey Karbowski of the Ecology Action Centre says the Centre has estimated it could cost as much as $60,000 to equip a single vessel, plus the ongoing costs of maintenance and component replacement. Some fishers believe the per boat costs to be much higher.

However, Barney says there are some advantages to help offset those costs. Data can be instantly available to the individual fishers without having to wait for government reports; it can produce not only observer data, but also information on catches, vessel operations, fleet data and ecosystem information; can become an integral part of a traceability program; and it can eliminate the need for traditional observer programs, which are estimated to cost up to $100,000 per year.