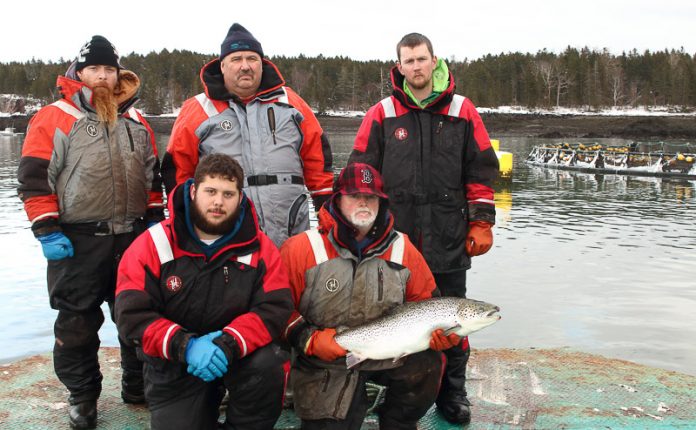 HALLOWELL, ME — Fresh Maine Atlantic salmon from Cooke Aquaculture’s Deep Cove marine farm site, near Eastport, was on the menu at the recent presidential inauguration events in Washington, D.C.

“We know Maine’s aquaculture industry is having a major impact on the prosperity of our coastal communities and working waterfronts, and the Maine brand is well respected by customers all over the United States,” says Sebastian Belle, executive director of the Maine Aquaculture Association.

“To have farmed salmon that were raised in the State of Maine served to President Trump, Governor LePage and to those celebrating the inauguration was a real honour and affirmation of our healthy, high quality, sustainably-produced farmed seafood.”

The salmon were individually hand-selected for the president from the Deep Cove site, one of Maine’s oldest salmon farms. These fish were raised from small eggs to smolt at one of Maine’s freshwater hatcheries before transfer to the site. They were harvested and packaged for shipment at the True North processing facility in Machiasport. In Washington, the salmon were smoked by the executive chef of the Blair House and served to guests, including Trump.

“Many of the men and women who raised these fish are long-term employees with a lifetime of experience on the water and proud contributors to the local economy,” says Cooke Aquaculture CEO Glenn Cooke.

“They took great pride in selecting beautiful fish for the trip to Washington. Our company has a keen interest in promoting the Maine brand, the future of the state’s economy, the health of its communities, its people and the health of the U.S. seafood sector,” Cooke says.

Cooke Aquaculture employs about 250 people in Downeast Maine in its fully integrated salmon farming operations. As the largest employer and taxpayer in the city of Eastport, and a major employer in Machiasport, the company is a key contributor to the state’s economy.

“Maine seafood is the best in the world and it’s a great honour to know the Maine brand, which reflects our pristine environment and world-class quality, was represented during the inauguration,” says Maine Department of Marine Resources Commissioner Patrick Keliher.

The U.S. is the third largest market for seafood in the world, but ranks 15th in terms of aquaculture production, importing 91 per cent of its seafood.

Maine is within a 24-hour truck ride from more than 150 million customers and has more than 190 farms that raise finfish, shellfish and marine plants, with a total economic impact of $137 million.

“Americans want more farmed Atlantic salmon and the Maine industry can deliver as we continue to improve and innovate in order to meet the increasing demand for our products,” Belle says. “Maine aquaculture is ready to grow and play a major
role in reversing our country’s seafood trade deficit.”