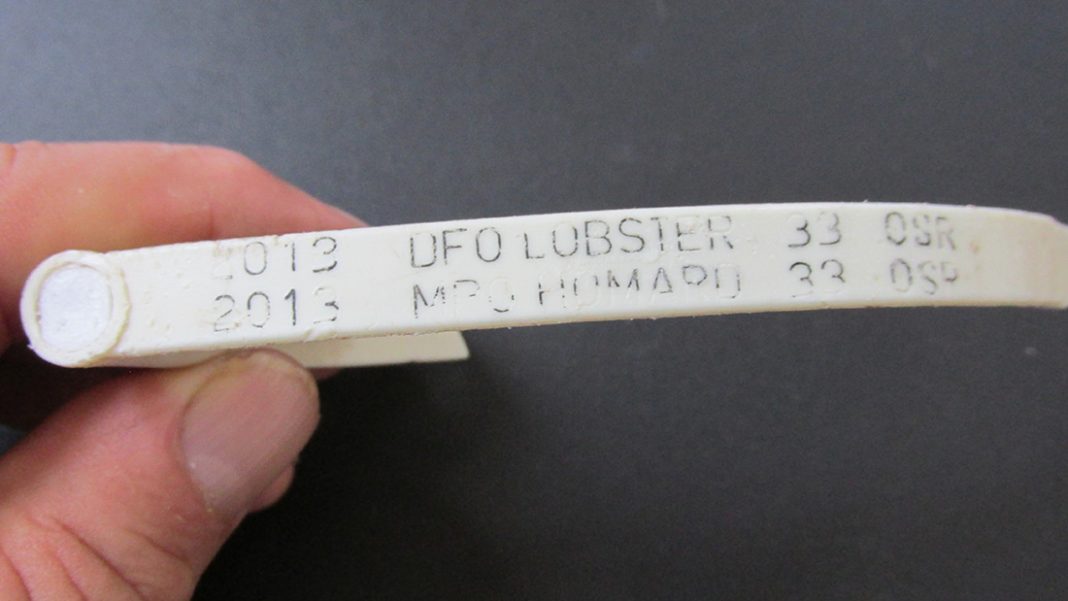 If lobster trap tags could talk, the one found on Tar Bay Beach on Great Exuma Island in the Bahamas would have a whopper to tell.

The LFA 33 tag, dated 2013 and numbered 33118263, was found by Bill and Gail Varsell while on vacation to the Bahamas in March. The couple reside in Goshen, Connecticut.

Self-professed “hardcore beach bums,” beachcombing is a favorite pastime for the Varsells.

“It’s one of the things we do,” said Bill. “We had the (family) house in the Bahamas to go to for free when we were young. We would go twice a year and arrange our lives around getting to a beach.”

The Varsells often spend a lot of time on the beaches of nearby Rhode Island, where they dig for clams and beachcomb.

“We find lobster trap tags quite frequently,” said Varsell. “It’s nice to see where they came from, how long they’ve been at sea, that kind of thing. It’s one of the things we look for when we beachcomb. We pick them up because they are plastic and we want to keep them out of the ecosystem. It’s always been an interesting thing to find so we were just amazed to find a Canadian one in the Bahamas.”

Considering the Bahamas has a north equatorial current that collects ocean debris from the coasts off Europe and Africa, as well as “stuff washed down the Amazon River,” Varsell concluded in  order for the tag to get to the Bahamas “it would have had to cross the Atlantic Ocean twice, first on the Gulf Stream towards England, then down along the coast of Europe, then back across the Atlantic to the Bahamas on the same current that brought Columbus. An epic five-year voyage,” he said.

“Where it came from and where it ended up, even as the crow flies is a hell of a long way and you add two Atlantic crossings to it, it was pretty amazing. It was like finding a note in the bottle.”

When asked, DFO research scientist Dave Brickman, said the drift path described by Varsell “would be the most likely to reach the Bahamas from LFA 33. It is also possible to follow the coastal/nearshore current(s) around the Gulf of Maine and down the eastern seaboard to Florida and then “jump” across to the Bahamas, but this is unlikely.

The final thing to keep in mind is that a surface drifter is influenced by the surface current and the wind, both of which have a random component that could steer a drifter in a path that does not follow the mean drift. In other words, anything is possible if not likely.”

Finding the lobster pot tag from LFA 33 conjured up some fond memories for Varsell, who visited Nova Scotia about 50 years ago when he was an teenager. Coincidently, it was in Petite Riviere, which is located in LFA 33, where Varsell remembers camping and eating “the sweetest lobster I ever had. Fifty years later I still remember. Petite Riviere is a beautiful place so we knew where it (the tag) had come from and it was pretty amazing.”

With the help of DFO, the trap tag was traced back to Lockeport area fisherman Phillip Stuart.

“That’s pretty neat,” he said when initially told the story. After having some time to digest the tale Stuart said “It was very interesting to hear that one of my lobster tags ended up in Bahamas. I have been putting a lot of thought into how it could have happened and it is amazing how it went that far. When we set our traps in the fall of every year all traps have a numbered tag which is received from DFO. At the end of the season all tags are removed from the traps once they are brought home and new tags are received the following season. During the winter season when we have a very bad storm a few traps may get lost. In this case the trap must have been lost because the tag is attached to the inside of the trap and it is very unlikely for it to break off. The trap must have deteriorated over the years and the tag floated. This also is very interesting to me because over the years I have worked very closely on projects with Clean Nova Scotia Foundation to help keep our oceans clean,” adding he participated in the Ship to Shore trailer discussing lost traps.

Varsell and Stuart have been in contact. The wayward lobster trap tag is being turned to Stuart by mail.