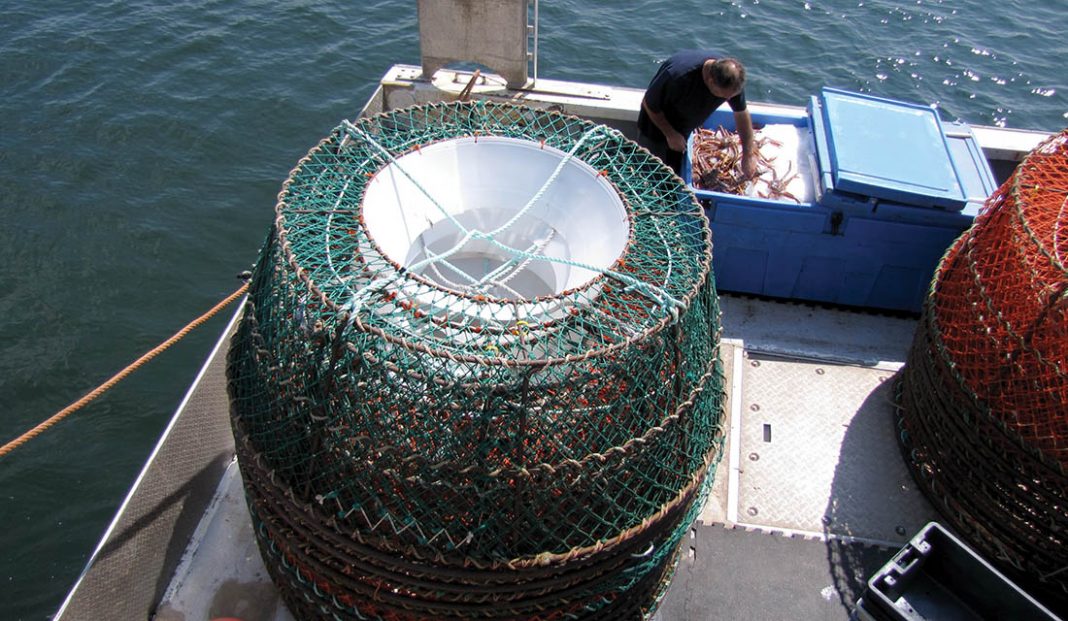 Presentations on ropeless gear retrieval and marking systems, experimental gear testing, experimental fisheries, regulatory and policy change, market interests and investment opportunities were on the agenda when the international Ropeless Consortium met for its annual meeting at the New Bedford Whaling Museum in New Bedford, MA on November 6.

Comprised of scientists, conservationists, researchers, fishermen and “like-minded people who are trying to reduce whale entanglements to move forward,” the Consortium is a group that doesn’t really answer to anybody, said Bay of Fundy Fishermen’s Association spokesperson Colin Sproul. He was recently elected to the Consortium’s board of directors.

“I was really encouraged by the atmosphere at the first Consortium,” he said.

“People were reaching out to fishermen and asking for our opinion. Everybody made it clear the one goal before the next Consortium was to involve more fishermen in the process. They recognize that in the future something that works for fishermen is something that will work for whales. We’re all in it together so I was encouraged by the mission. That’s why I went back again.”

Many of the presentations at the meeting were works of progress, being shared in confidence among colleagues, so media members were not permitted to attend. Videotaping, audiotaping and photography during the meeting were also prohibited.

“The meeting represents a forum for free exchange of information and ideas between fishermen and associations, scientists and conservationists from academia, governments and NGOs,” reads the Ropeless Consortium website.

“Part of the beauty of it is you can talk freely and openly about what works and what doesn’t,” said Sproul.

“There was a lot of discussion. From a fishermen’s point of view, there was frank conversation of what worked during testing periods and what didn’t. I also think there was a consensus in the room that everybody has the understanding the reason for doing this is to save whales and to save fishermen too. There’s been a lot of action taken towards fishermen on both sides of the border around right whales… that’s what’s driving a lot of this.”

Sproul said from what he’s seen, “there’s not a push to transition to ropeless gear technology everywhere at all times. I don’t see us reaching a point where all fisheries in Canada are ropeless. I don’t think there’s a need for that. We all recognize the general public and governments are not going to allow rope entanglements from fishing gear to kill huge numbers of whales. Will it ever be eliminated? No, but it can be kept below acceptable levels, whether that’s done by blanket fishery closures like we have seen in the Bay of Fundy this year, like we saw in the Gulf for snow crab fishermen and other lobster fisheries is something that is going to be up to fishermen, the conservation community and governments to decide and something we all must seriously think about. Because in my view in Nova Scotia, at least the Minister of Fisheries has proven what side he’s going to come down on. He’s going to come down on the side of the whales. As fishermen we need to be prepared to fish ropelessly in areas that we absolutely have to be in to make money.”

Sproul said it is still the “very early stages of developing this technology and still a ways off down the road to where it is robust and functional to use in an everyday environment and at a cheap enough price point to where it makes sense to the industry. There will be closures to roped fisheries and if you can use that technology to fish that one area… if that means we have to ropeless fish in areas then that’s what it’s going to have to be, but it’s going to have to be to the point where with government funding and government participation it is economically feasible for fishermen to do that. Right now, it is certainly not. It’s something we’ve got to try,” he said.

“The wider community want fishermen to try. The fishing community can’t just turn its back on it because that’s going to get us tied up to the wharf.”